For years I have lusted the Zeiss lenses, and never thought I’d be able to purchase, until the universe somehow hooked me up with a great deal. I am now the third owner of the Zeiss Makro Planer 50mm 2.0f lens, and this glass is simply amazing. The bokeh is so smooth and soft! Even a poison ivy vine is beautiful, eh?

Last year at this time, my die-hard football fanatic friend, Mitch, had posted about “the big day” and being my usual sarcastic self, commented, “You mean there’s something going on today? Oh yeah, I’m going to redecorate my porch with all the goodies I got at Home Goods last night!” His reply, “Oh Schelley.” (I can envision him shaking his head.) “It’s the game!” “Oh, is WWF on tonight?” I, of course, knew it was the Super Bowl, but I always like to play dumb with Mitch when it comes to football.

Well, except for Florida State University football. Having been a Tallahassee Lassie my entire life – and having gone to elementary, middle, and high school on FSU campus – AND having gone to college and graduated from the College of Communications at FSU – AND my father having been a professor at the College of Business at FSU for well over three decades – well, you could say that FSU courses through my blood. Tallahassee, Florida, is a college town (FSU, FAMU, TCC) and we take our FSU football seriously!

Now I will admit to going through close to a decade of football fever burnout. This happened around the time of getting married and having Ian. Family just took precedence over football. And it’s not much fun lugging around an infant, the “Mule bag” as my hubby liked to call it, around some 35,000+ screaming football fans. The party starts well before the game, as tailgating is found all around the surrounding area of people ready for some football! But alas, by the time Ian turned nine, the football fever had returned. Plus, we were given three tickets because my sis-in-law and nieces had become ill, so we took their spots. How can you say no to a free FSU football game? You don’t.

I was simply amazed to see how quickly Ian became one of us FSU football fans, and quickly learn all of our special football traditions. The Seminole war chant, the wave, the “1st Down” finger, the pounding of the feet, the excitement of the crowd, all garnet and gold, is contagious. It’s exciting. It’s college football! So needless to say, we’ve been to several home games now, and we’ve faithfully watched – or listened to the radio traveling the state of Florida – our awesome FSU football team beat every other team during the 2013 football season. We then went on to win the ACC championship. Then we went on to the BSC Championship game vs. Auburn in Pasadena. Our beloved FSU team WON THE NATIONAL CHAMPIONSHIP! Now that’s something to cheer about! Which I did, very loudly. If you happened to see the game, you know it wasn’t a blowout. As a matter of fact, we were losing most of the game. It was what you call a “nail biting” game. Except for I cursed. Very loudly. A lot.

My son, Ian, who had already gone to bed, came out to say, “Mommy, I think the state of Texas can hear you.” I responded, “Well, I’m a NOLE and we do it BIG!” The three of us watched the final minutes of the game. All three of us were cheering. “Hear that roar?” I posted on Facebook. “That’s Tallahassee roaring right now!” “That’s how we play football.” I’m getting goosebumps just remembering how exciting it was to watch our team work their way to the #1 spot.

Yesterday, February 1st, Tallahassee finally got to celebrate with our beloved FSU football team at the celebration held at Doak S. Campbell Stadium. It was a great day for us 35,000 fans getting to relive some of those moments, hear from Famous Jameis (Winston), our freshman Heisman-winning quarterback, Jimbo Fisher, the coach who has quickly won the love of all of us fans, and many others. Then we got to GO ON THE FIELD to meet the players and coach. Talk about exciting.

Last night, when I put Ian to bed, he said that at the stadium he was so excited he almost cried. I told him I knew exactly the feeling, and that it’s normal. It’s those time when the goosebumps arrive, and you’ve got a bump in the back of your throat, you’re so proud and part of the excitement, that you do want to cry tears of utter joy.

So are you ready for some football? Tonight’s the “big game.” It’s called the Super Bowl, Mitch. Will I watch it? Sure, parts of it. I actually love the commercials. But it’s not FSU football.

That’s where my heart lives. 😀 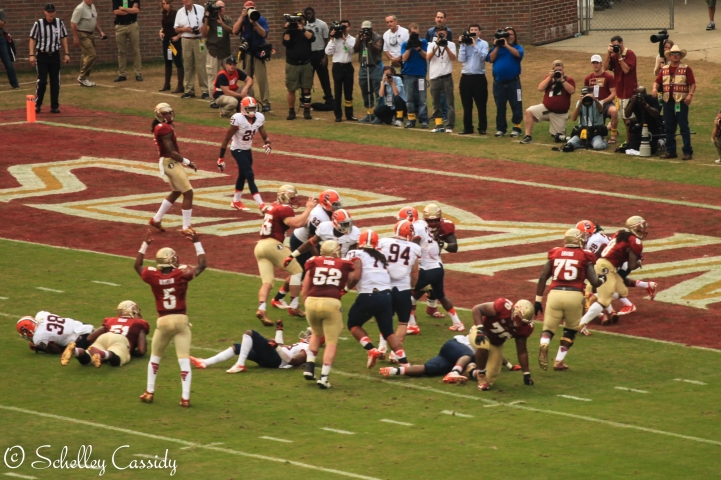 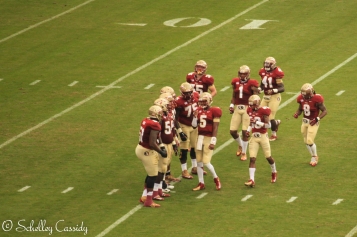 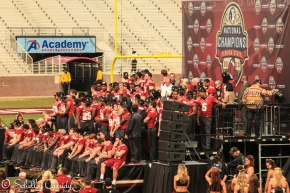 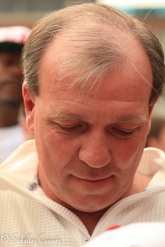 P.S. Jimbo Fisher was giving autographs, so Paul got his National Championship hat signed, Ian got his commemorative poster signed, and me? I asked Jimbo to sign my Canon 70-200mm 4.0 L lens (since I’ve taken so many pictures of FSU football with this lens). Now I call it my “Jumbo Jimbo Lens!” I said to Coach Fisher, “Next season I want to be on the field taking pictures of your awesome team.” He said, “That would be fine with me!” So I’m going to make it happen. Maybe you’ll see me on the field with my JJL. And Mitch. (He’s a great photographer who just so happens to be at ALL of the FSU games.) 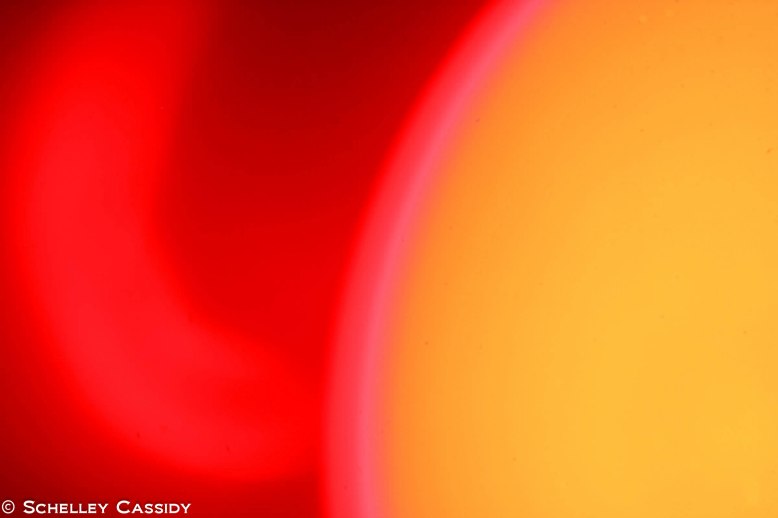 Ever wonder what a solar flare looks like through the lens of a telescope? I captured this image using a solar filter and the telescope as my camera lens.

Today we broke out my telescope and managed to locate all of the pieces and parts necessary to photograph the sun in all her glory, particularly the solar filter! (Otherwise, not only would you go blind, but you’d fry your camera and telescope equipment.)

Lots of clouds rolled in, but I am thankful for getting several good shots. And more thankful to dear hubby who patiently got the sun in view and in focus. You’d think finding a huge golden orb would be easy, but it’s not!

There are sun spots on the top left and bottom middle. Because these were taken with the telescope as my camera lens, the images are reverse of what you’d see.